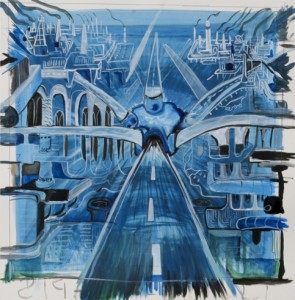 After the seminal dub / illbient records „Psychotropical Heatwave“ and „Fantastic Voyage“ on the cult label WordSound PRINCE CHARMING returns with a direct hit. On „LAPIS LAZULI“ the sound alchemist interweaves strands of his wide spread musical universe into an atmospherical tight album. Illbient – PRINCE CHARMING has been rejecting this categorization since the start of his work –  as genre is too small for such a vast experience. „LAPIS LAZULI“ takes the listener on a quirky extravaganza through space and time; dub, exotica, ragtime, breakbeat, oriental, cinematic soundtrack, blues, classical, latin, psychedelic, afro-jazz, field recordings and science fiction are just a few of his numerous and diverse influences reworked and melted elegantly into coherent tracks titled „Zebrine Polymorphous Blues“, „Spider Scorpian Conch“,  „Pomegranate of Vice (a Supergeometry Symphony)“ or „Uvarovite and Demantoid Dub“. Uppers and downers, rockers and chillers – a record as entertaining and imaginative as PRINCE CHARMING has never been !

While being danceable and really easy even if at the very first listening some combinations could seem hazardous, “lapis lazuli” has an overall night feel: not exactly something for the chill-out zone but without any doubt something you can relax at while still dancing … there’s class and elegance overwhelming from the first to the last episode of this work: thumbs up. www.chaindlk.com

… the „experimental love phylogenesis“ of the Prince mesmerises the senses with dub versions of horror, the perfume of western, an aftertaste of adventures in illbient spaces … imaginary soundtracks for B-movie-trips into interzones, enchanted islands, lost worlds and forbidden planets …  Bad Alchemy #62