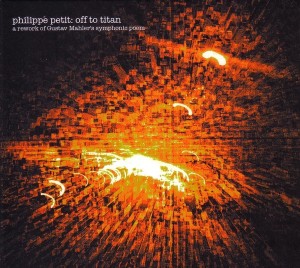 PHILIPPE PETIT – Off  To Titan

In a previous century Gustav Mahler  – whose 150th anniversary on july 7th is being celebrated this year – composed a symphony named „Titan“. Created in search of a work that echoed industrialism and society in the nineteenth century. Philippe Petit believed that even if firmly rooted into Classical it was announcing what Contemporary music would become so it sounded natural to recontextualize, add new flavours by having something constantly modern in there. Philippe began work on a recording of the original symphony – re-editing, time-stretching, distorting, filtering. He then sent the result to Jono Podmore aka KUMO as a backing track who began work with his theremin and electronics by identifying areas he could enhance or develop or even alienate further from their original form, and then set to work improvising and layering new material into the piece, mindful of the collage aesthetic in Mahler’s work. Jono sent the results to Philippe who began mixing both works and further processing the result. In a way reminiscent of „2001, A Space Odyssey“ offering romantic music in an ultra modern design which set the orchestra in a new space… a little bit like if Bernhard Herrmann had scored the glorious „Forbidden Planet“ sci-fi classic, listening to the soundtrack, the Titan you’re heading for is Saturn’s biggest moon! May the stars be with you …

… ideal stuff to re-work, in the hands of Petit. He starts with the classical music as written [by Mahler], but then slowly starts the expand on the music, through re-edits, distortion, time stretching and recontextualsation. He receives help from one Jono Podmore (also known as Kumo) who added theremin and electronics. References are made to the soundtracks of ‘Forbidden Planet’, ’2001 – A Space Odyssey’, incorporating classical music into electronic music. For that’s what is happening here.  http://www.vitalweekly.net/

This work obviously reminds me of the greatest Ligeti used for the soundtrack [of 2001 A Space Odyssey], at the same time the beginning of the first movement reminded me of some parts of Vangelis‘ soundtrack for Blade Runner.  http://www.chaindlk.com

… this one’s an unusual project, the bold kind that will require a few listens in order to untangle what’s real and what’s not, what’s heartfelt and what’s sarcastic. On Off to Titan, the turntablist is reconstructing Gustav Mahler’s “Titan” symphony, to which he adds electronic textures. The X factor comes from Jono Podmore, called in to add, in carefully selected spots along the way, flights of theremin worthy of sci-fi soundtracks from half a century ago. They come in in a striking, unmistakable way, and NOW you’re lost, between the pompousness of the orchestra and the mad choreographies of these in-your-face electronics.  http://blog.monsieurdelire.com