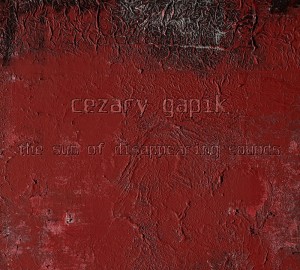 Born 1963 in Czestochowa / Poland, Cezary Gapik’s formative musical experiences after the punk revolt were the more experimental outings of Public Image Ltd. and industrial pioneers as Throbbing Gristle and Cabaret Voltaire. The popularisation of the computer as a creative tool in the mid-nineties gave birth to Gapik’s present extensive style: the isolationist projects of Mick Harris (Scorn, Lull) are as traceable as are 20th century contemporary avant-garde composers (Stockhausen, Xenakis, Ferrari) and masters of minimal music (Phill Niblock, Eliane Radigue). For his intense synthesis of multi-layered, heavy industrial drones, catharthic noise, haunting murmurs and field recordings of unrecognisable origins the uncompromising sound artist coined the term „ambient depressionism”. Using prepared instruments, various objects or computer-processed synthetic sounds, Gapik creates dense sonic paintings, rich in colour and radical in atmosphere. Having self-released numerous CDRs in his ongoing series of the „sound sketchbook”, „The Sum Of Disappearing Sounds” is one of the key artistic works of this contemporary master in the dark ambient / industrial / drone scene of today. The album comes as an multi-fold out digipak in a limited edition of 222 handnumbered items.

… the blessed out vapour trail of his “uncertainty [#0522]” is a considerable detour from miserabilism, adopting much more of an angelic feel with the same stratospheric arcs of sinewy digital smear heard throughout Kompakt’s seminal Pop Ambient series. Here, snow-blindingly bright tones stream alongside tidal washes of white noise and a tumbling filigree of airborne sonic dust. The other three lengthy tracks intensify and darken the album through accretions of resonant metallic timbres slowly revolving from harmonic overtones to rasping dissonance, leading to the ominous electronic pall of “Still, No Beginning, And … Without End”. (Wire 03/12)

… there is a real sense of a journey through this album, from the gentle pastoral opening piece through to the more rugged and dense middle two compositions to the arid and desolate soundscapes of the closing piece, and, despite the different aspect of these, it all feels very much as part of a considered whole, a purposely designed progression, which is a strong testament of Cezary Gapik’s great maturity as a musician and sound artist.http://www.themilkfactory.co.uk