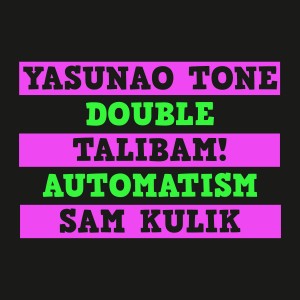 “Bringing together the most calamitous materials from their home planets of Noise, glitch, and free improvisation, TONE and TALIBAM! are at once the likeliest and unlikeliest of conspirators. Despite making his home in New York since 1971, TONE’s foundational electronic work harkens back to his early days in revolutionary Japanese avant-garde collectives Group ONGAKU and HI RED CENTER, and resonates with his groundbreaking deconstructions of digital CD sound in the 1980s. Meanwhile in the post-art worlds of millennial Brooklyn, TALIBAM! have cranked out their own absurd, profane and unclassifiable improvisational style, bringing their provocations around the world, and proficiently mediating jazz, rock, and hip-hop along the way; trombonist SAM KULIK brings an acoustic element to the mix that invokes the live sonic mixes of MUSICA ELETTRONICA VIVA. In their collaboration “Double Automatism”, they forge a confrontational new alliance in the transnational history of experimental sound, with the noisiest consequences imaginable.”

(David Novak, author of “Japanoise: Music at the Edge of Circulation”)

The idea for “Double Automatism” was born in 2012 when TALIBAM! and SAM KULIK were invited to interpret YASUNAO TONE’s graphic scores and game pieces as part of the Japan 1955-70 avantgarde exhibition at the Museum Of Modern Art in NYC where they met the fluxus / electronic artist and immediately developed a mutual affinity for each other. Six months later the trio invited TONE (born 1935) for a recording session – KULIK on trombone, MATT MOTTEL on his Roland Alpha Juno 1 analogue synth, KEVIN SHEA (also drummer in MOSTLY OTHER PEOPLE DO THE KILLING) on electronic MIDI mallet percussion and TONE using his self-developed MP3 Deviations on his notebook. The 2 epic pieces on “Double Automatism” not only continue TALIBAM!’s enduring explorations of new musical territory beyond genre-limitations, the album is also a forceful testimony of TONE’s unique artistry that was documented by recent collaborations with RUSSELL HASWELL or FLORIAN HECKER (all on EDITIONS MEGO) and solo works on TZADIK or ASPHODEL.

Pollock in 3D and on speed. Bad Alchemy